Well, it has been such a long time since I wrote a blog… I have so many ideas and not enough time. A lot of my time has been spent with Fluffy! He had over 14 weeks of daily visits.

Due to Covid and travel cancelled, there hasn’t been much of a need for pet sitters. In March 2020, I started to get cancellations and then the whole world was uncertain about the future. Obviously, this has gone on longer than was originally thought. In fact, with amber lists, all cat sitting bookings have been provisional until the day of departure.

In November I started a full time day job as a finance assistant but pet sitting is picking up now with people able to go away. I’ve met some gorgeous new cats as well as visiting regular cats. Some of my ‘regulars’ remember me and others aren’t too sure.

This year, I’ve had one long term client. Fluffy! Unfortunately his owner has been poorly. Fluffy’s dad had care in place for him but then they couldn’t do it so I got a phone call and we had a long chat before I visited that day.

When I met Fluffy for the first time, it was love at first sight. He has cute face markings as well as being fluffy. I hope he doesn’t mind me saying, but he is on the larger side too. A big ball of fluff (and teeth and claws as it turns out). He has very large fluffy feet and ears which made me think he has some Maine Coon genetics.

Fluffy went to his current owner via a colleague at his workplace. Fluffy desperately needed a home. He had been a stray on the street fending for himself until his previous owner took him in. Then the owner had died and his relatives had been looking for a home for him. No-one else could take him in.

At first Fluffy was quite wary. I was a new human being who he hadn’t met before. He seemed to like a fuss…. and then he would change his mind in an instant. He would grab my arm with all four paws and mouth. I called them Fluffy special cuddles. At first these would make me jump but I soon got used to the element of surprise and didn’t react.

Overtime I could usually tell when he had had enough of a cuddle. But not always! However, I felt I had his trust. He was a house cat but was allowed out in the garden, usually near me. He would always come running when I called him for his tea.

At the beginning Fluffy would only have five minutes of cuddles. Over the weeks this increased slowly but wasn’t consistent. Eventually, it built up ten to twenty minutes of him sat on my knee or next to me. Only once did he stay sat on me for for thirty minutes.

When I visit a cat, I try to do fit in to what the cat wants to do. With Fluffy, we soon got into a routine of cuddle for as long as he wanted, time outside and then playing.

When we were outside, Fluffy would sometimes go off on his own, and sometimes follow me. I checked the water levels on the ponds and looked for the tadpoles. Seeing them grow was amazing! I put food out for the hedgehogs and foxes as well.

When I went upstairs to do his water bowl, he would come meowing looking for me even though I talked to him while I was doing it. 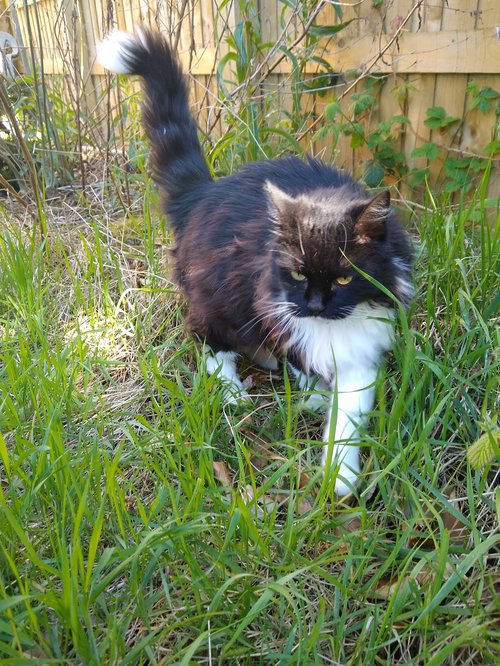 To keep a cat happy and mentally active is important to me. If a cat gets bored, or stressed, they may experience health problems such as over grooming, cystitis etc. This was a worry for Fluffy as his owner was away for so long. Pets have a bond with their owner and often prefer familiarity.

At the beginning I left treats in activity feeders – I have quite a range. Due to his big paws he wasn’t able to use all of them. Some he couldn’t work out either. To be honest, he couldn’t always be bothered to try and I would often find them as I’d left them. Instead I used treats to bond with him and rewards for grooming. As Fluffy was a large cat, I tried to limit these.

I fed him at the end of the visits so he would have something to do after I’d gone. I also took a range of toys but it was hard to find new things to keep him entertained.

Playing was an important part of keeping him interested, happy and active. Just walking around the garden encouraged him to walk and explore with me. Sometimes he would go off on his own or have mad moments chasing toys, but mostly he would stay with me.

As with all visits to cats, it is important that the cats are happy, and also the owners. After each visit I text Fluffy’s dad with updates and photos. (It’s not always easy to take decent photos of cats as they move quickly – plus black cats are always hard to photograph.)

I had lots of favourite moments with Fluffy. I loved it when he jumped and pounced on toys, or ran up the garden. Sometimes I would sit in the garden and he would come and sit next to me.

On a couple of occasions, Ben (my husband) came with me. I checked with the owner first! Ben is very handy and made the back door easier to open for me as well as changing a light bulb. Plus he helped with Fluffy’s nails. Ben is on my pet sitting insurance as back up but it is so helpful for times like these.

Fluffy’s nails needed cutting but as he was feisty I needed help from Ben. We tried our usual method of Ben holding the cat so I could quickly and stress free, trim his nails…. Fluffy was not having this at all and I couldn’t cut a single nail. After a quick rethink, Fluffy sat on Ben’s knee quite happily and to distract him, Ben offered a stick treat. Fluffy wasn’t happy but with the treat he was distracted enough for me to do them all. I felt that this was a massive achievement. What annoyed me was Fluffy took to Ben straight away! I think he preferred males.

Part of the Family

Visiting Fluffy each day gave me a routine. When I was working from home, I enjoyed the walk to see him. It was a good half hours walk but it was great to be out and have a purpose to exercise.

When I returned to working in the office, I found visiting Fluffy was great to change gears and have time to switch off before going home. This was helpful as being in a new finance position, there was lots to learn.

At tea time, I would tell the children what Fluffy had been up to. They always asked when I got in if I’d had any of Fluffy’s special cuddles. He was the highlight of our day.

Having a cat to visit while the world was in lock down and limited going out was amazing. Without any other bookings, it made me feel that it was worth continuing with Wirral Whiskers.

Responsibility to the Pet Owner

Looking after pets for other people is a big responsibility. I know I wouldn’t like to leave my pets. With Fluffy, this was increased as I didn’t know how long his owner would be away, plus I knew he would be worried. I sent daily photos and updates as well as putting all the photos in a Google space for him to see when he got home.

Also, I made sure that there was food and litter so the owner didn’t have to rush out to the shops when he got back.

What I find amazing is that Fluffy’s dad trusted me to care for Fluffy and his home without even meeting me. It was always two way communication with him asking if I thought Fluffy needed anything else, or asking what we could do to make sure Fluffy was happy.

As with all cats, they became part of our family but this time, the owner did too. He kept me updated on how he was. We all just wanted him to be well so that he could be reunited with Fluffy.

I’m glad the owner is back home and reunited with Fluffy. At the weekend we got to meet for the first time. It was strange as we’d been communicating daily for months without meeting so it felt like we knew each other. Plus I was thrilled to see Fluffy again. He did his characteristic run in from the garden to say hello, and then he wasn’t bothered. It was lovely to give him a fuss.

I would like to say a massive thank you to Fluffy's dad for putting his trust in me and letting me visit his lovely cat. 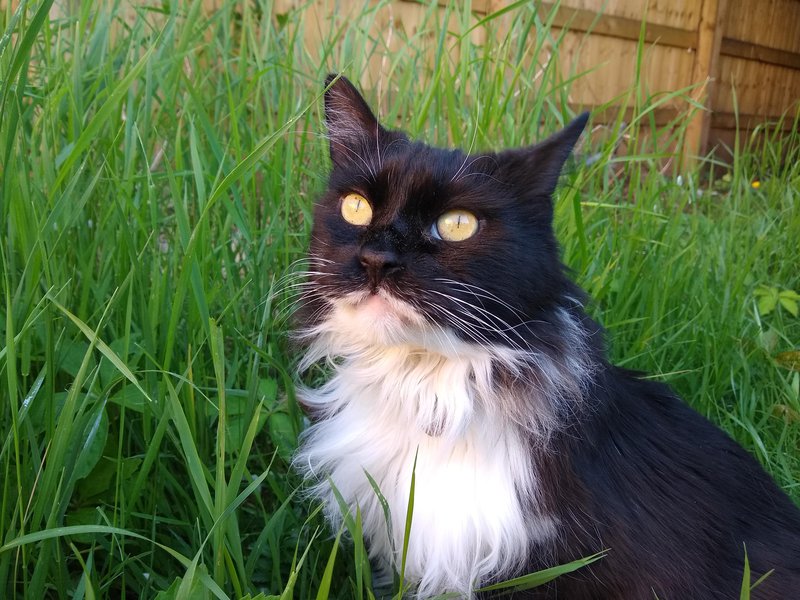