February is Spay/Neuter Awareness month with World Spay Day taking place on the 25th February 2020. Do you know why this is necessary?

February is Spay/Neuter Awareness month with World Spay Day taking place on the 25th February 2020. This is an important day to raise awareness of the need to neuter and spay their pets. Neutering is always promoted as a part of responsible pet ownership, but do you know why?

There are many reasons why you should neuter your animals! It is one of those things that I know should be done, primarily to reduce the amount of extra animals needing homes. There are many more reasons for neutering and I've tried to write them briefly here.

The term 'neutering' means the part or complete removal of the reproductive organs and refers to the procedure for both males and females. Due to the nature of the operation, the male neutering procedure is a shorter operation than the female version of neutering.

The procedure for females is called a 'spay'. When an animal is spayed, the womb and ovaries are removed. If you would like to see a video of a cat spay, please click here. (Beware, if you are squeamish don't watch this video.)

Generally for males, the term is castration for the removal of the testicles. If you would like to see a video of the castration procedure, please click here. There are a lot more videos available online if you are interested.

The price of neutering varies on the vets practice charges, as well as the amount of medicine and equipment required. The Cat's Protection said that the cost of neutering cats can be between £40 to £100 and they have schemes where they can help with the costs. More information can be found here.

The Blue Cross said that neutering a dog costs between £100 to £400. Again the cost depends on whether a spay or castration and the size of the dog.

The cost for smaller animals such as rabbits or ferrets is usually in line with the cost of cat neutering.

The advantages of getting a pet neutered really outweighs the cost of neutering.

Before I had children I volunteered with a local cat rescue and fostered cats. This was an amazing experience as at that time I didn't have a cat of my own. I loved looking after the families until they got new homes. The rescue owner really wanted to help all cats and she went up to Clatterbridge daily to feed the feral cats. She was also involved in trapping the feral cats to get them neutered before returning them. This was to help keep down the feral population. This is such an amazing thing to do as reduces the amount of unloved and uncared for cats reducing the suffering.

When I was growing up, there were often stray cats around. My dad used to count the tins of cat food to see how many my mum was feeding. We still laugh about this now.

We currently live in a on a busy road in a built up area and very rarely see stray cats. In fact, I don't see many cats. If I do see one in the garden, it is a rarity and I go out with the cat biscuits. Usually the cats are too quick and run away. 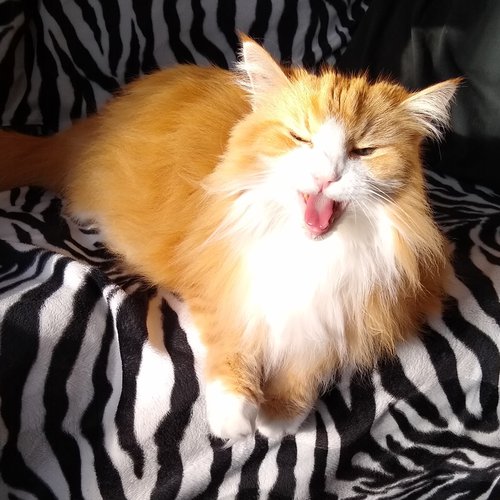