Yes, I am in fact, looking for another cat. Strangely enough, my husband is fine about it. Today's blog is about the process we have been going through to find another cat.

I am looking for another cat. Yes I know, we have recently got a cat...

I haven't gone mad and I've put a lot of consideration into this. Cats can live for about twenty years which means that this is a long term commitment. Adding a new pet family member is not a decision to take lightly.

The History Behind Looking for another Cat

We've had our cat Fermi since May but due to the circumstances, we are looking for a feline companion for her.

Fermi is absolutely gorgeous and we all think that she is adorable. It was love at first sight. We had got her from a foster family via the Norwegian Forest Cat Club Rescue. We were told she was timid and preferred the company of other cats and wasn't a lap cat.

This is very true! Fermi does her best to avoid human contact and has several safe hiding places. Fermi is still terribly anxious and nervous. She has improved slightly but we want her to be settled. Don't get me wrong, she has improved! This is going to be a slow process and we want to help her as much as we can.

The family would love the cat to be more integrated and love cuddles. To be honest, we would be pleased if she was happy. At the moment she is frightened of humans and will avoid us if she can.

I've tried lots of things to make her feel more at home. To start with we kept her in the kitchen for a few days. We stayed in there with her but without interaction so she could get used to us. Then the following few days she stayed downstairs out of her own choice. To help her settle in, we had toys, food, a travel cage, a blanket from her previous home.

We have been doing all of things things to settle in a new cat as mentioned in a previous article. I've been hand feeding chicken every day and even now, she is very hesitant to take it.

She now has happier body language now that she is used to us. Her ears aren't in a frightened pose as much; her eyes aren't always wide. I get really excited when she blinks at me or doesn't run away.

In the evening, she likes to sit in the kitchen in a bed behind the table. This is great as she has lots of escape routes humans can't get through. If she is settled, she will let me sit in a chair next to her. She looks asleep but is alert if I move in her direction. She fills the small cat bed and these days, will be flat out in it rather than sat on all four paws ready to leap.

When Ginger died, I said I didn't want to get another cat as I was too upset. I put all her food and toys in a bag to deal with at a later date when we could go out.

However, I really missed her. She loved being around us and often just wanted a fuss. All of the family missed her. The saying "a house is only a home with a cat" was very true. Even my husband, Ben felt such a loss.

Ben was surprised that I had a we got a match with a rescue cat so soon. I'd contacted the NFC rescue expecting it to be months before there was a suitable cat for us. However, it was only a couple of days between enquiring and picking her up.

He had another shock recently when there was a phone call for me. When he asked who it was, I told him "nothing to be concerned about". This immediately raised his suspicions and he said, "that sounds like I should be worried". The local RSPCA has an old cat that needed an indoor home. So I applied, and they rang back five minutes later. (Hence the shock as hadn't got round to telling Ben yet...) However, the elderly cat didn't get on with young females so we weren't a match.

When the children heard what happened, they were excited and disappointed at the same time. We are all willing Fermi to be happy and content. Poor Ben didn't have a chance between me and the kids!

I explained what I had been doing and that it had to be a suitable match. We need a cat that has to be an indoor cat due to living on a main road. (Fermi was 6 and had always been an indoor cat.) So we were looking for a cat with perhaps a disability, older or always been an indoor cat. It couldn't have FIV or anything contagious and needed to get on with other cats. Also they have to be able to tolerate children. Our children are very good with pets but not all cats are happy with children.

Then a couple of days later, my 11 year old sent me an email. She had been doing research of her own and sent me a list of links to pets that she thought were suitable. I had a look at all of the links - some were just kittens for sale but one was a kitten that was called Bean.

Applying for Another Cat 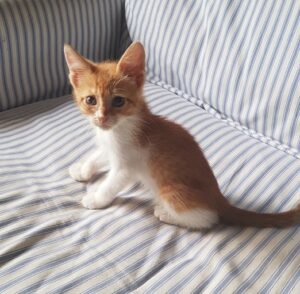 Bean sounded ideal as he was a kitten that had to be an indoor cat as partially sighted. It would be such a joy to have a kitten as I haven't had one in about 30 years. Also, Fermi has had kittens in the past so I was hoping that she would mother it. The advert was on Pets4Homes via a rescue. We thought it was in Chorley which isn't too far away.

I tried ringing the number but didn't get any reply so the next day I sent a text. When the lady replied she said she had placed the advert for Cyprus Pride House. This, not as first thought, was not in Chorley but actually in Cyprus.

I completed an adoption form and had several email chats with a June, one of the founders of Cyprus Pride House. I think we passed the first stage of the process as we are going to have a home check!

I'll let you know the outcome...

(PS Ben knows what is going on and thinks it is a good idea too.)