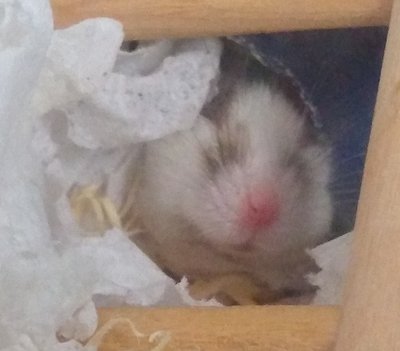 I love multimammate mice! We first got a family of this sort of mice from an RSPCA near Manchester. I’d been looking for some rescue mice for my daughter but was unable to find any until I came across these. I tried to find out more about these animals but could only find out that Amazon sold them as snake food. Information was very limited! It still is quite limited.

It turns out the family we got was rescued from an illegal breeding warehouse. There was a mum, two of her young and the sister of the mum. They were very fast and didn’t like being handled. The mum was very protective of her family and would bite us. In fact they were all a bit nippy.

We found they were very destructive and could gnaw through a bedding box in a few days. Fortunately they were in a massive cat proof tank with a wooden lid with narrow bar mesh. They even chewed through cable ties holding up ladders and toys; then the ladders slowly disappeared.

Their habitat was in the living room so they really became part of family. We loved watching and talking to them. They often got treats and fed bits of our food.

Over time, the mice became tame. The bravest mouse was one of the daughters and you could tell how brave they were by their size. Mum was definitely the boss! After time, they aged and sadly one by one they died. Each time the group dynamics changed and there was always a power struggle to be top dog (mouse).

We were very sad when they all died. They were such a big part of the family and each one had their own personality.

Eventually we managed to get a new family and we currently have five females. There are four which are sisters, and one which is a week younger from another litter. They had been handled but they are quite skittish and fast. When I open the lid, they come running to see what treats I have. I’m surprised that it is the mouse that likes to be handled the least, that comes running first for food.

All five get on well and we can tell which mouse is in charge. It’s funny how she keeps watch on the others and keeps and eye on me. The least dominant mouse usually hangs out with her.

People do think I’m a bit mad but I love multimammate mice. They are full of character, life and fun. Information on them is still limited but they are more common as pets now so there are groups on Facebook. On Instagram the majority of pictures of these animals are from 'feeder breeders'. People breed them in large quantities for snake food. When I Googled for information about them, there was just be pictures of packets of frozen mice. They have 18 nipples and very large litters which means the population increases very quickly.

If you are interested in them, definitely research them first! (Well as best as you can with the restricted information available.) I read that they aren’t pets suitable for children as they move very fast, but I think it depends on the mouse and the child. Yes they do move fast but a couple like being held and we get so much pleasure from watching them too.

My daughter loves them so much. She sends me photos of them when I am away from home and tells me what they have been up to. As they are in our living room, they get seen a lot. As they run across their cage, they catch our eye.

I'm working on producing some more accurate, information about keeping multimammate mice as pets. I feel my experience is limited as I've only kept females before and haven't had any babies.

Any questions or if you have got further tips, please get in touch.