I thought I'd write about cat castration. Why is this so personal to me? Well last week Bean lost his beans. It is a simple, routine operation with many benefits to the pet and pet owner. I did feel mean dropping him off for castration. Read more to find out why.

Castration is routine operation for male cats. In fact, castration is a routinely performed on most animals, even mice. After all many years of being a cat mum, I've not experienced taking a cat to be castrated. We usually get second hand pets and they have been neutered already. Actually, thinking about it, we've usually had female pets apart from hamsters.

Castration is the process which stops the testicles function. This can be done chemically or surgically. In pets it is usually performed by a quick, surgical procedure.

Most commonly, the pet is anaesthetised, a small slit is made in the skin and the testicles removed, tied and then a couple of stitches put in.

If you want to know more about the castration operation, here is a great video. There are lots of videos on YouTube with different methods. I find it really interesting to see what happens.

After the operation, the pet will be drowsy for about 12 to 24 hours. There will be a small wound and some bruising where the testicles were removed. The wound can take up to 14 days to heal. When you collect the pet, a nurse or vet will give you guidance of what to expect.

Does it hurt the cat? The short answer is no. The cats will be anaesthetised during the procedure and will be given pain relief medicine. They may feel discomfort at the site of the wound afterwards. The discomfort can be reduced with medication (and of course, distraction with playing or food).

Cats become sexually mature at around 5 months. The age at which castration is carried out will depend on the vets recommendation but is usually when the cat is between 4 and 6 months of age.

One of the videos had the text "It goes without saying that these videos are intended for educational purposes, and these surgeries should only be performed by veterinary professionals". If your pet is ill, or you need preventative care, always consult a vet! Often going to the vets sooner, rather than later can reduce stress and pain for the pet.

As another side note, all animals are different and as with any operation, it may not always be straightforward and there are risks involved. These risks are outweighed by the positive effects.

Why Castrate your Cat

First and foremost, castration and spaying reduce the amount of unwanted young. There are so many cats needing homes anyway. On average, female cat can have 4 kittens in a litter but it can range from 1 to about 10. A female cat can have 3 litters a year for about 15 years. This is not good for the cat because the health of the mother and her kittens would be compromised by having excessive litters. So the male could father lots of kittens depending on how many fertile females he finds.

Cats Happy to Stay at Home

Hormone production will be reduced so the cat will be happy being at home without being territorial and they won't have the instinct to roam looking for a mate.

Cats roaming into other cats territories is a major cause of fights. As roaming behaviour is reduced, the risk of the cat getting into a fight is also reduced.

Diseases such as FIV (Feline Immunodeficiency Virus) can be passed on via saliva from a bite. This is usually due to mating or fighting. FIV causes the immune system to be weak and therefore makes the cat susceptible to other health issues. Cats with FIV should be kept indoors so they don't transmit it to other cats. FIV can shorten the cats' life span.

Another bonus is that castration prevents testicular cancer and future prostrate problems.

If the cats are staying at home, they are less likely to be involved in accidents. They won't be out late, in the dark, making rash decisions or just running away from/to a fight and getting hit by a car.

Spraying behaviour is also linked to if a cat is unhappy or if anything changes in his environment. A stressed cat will want to mark his belongings, territory and send communication signals to other cats.

Another added bonus is that the male cats urine will be less smelly as it contains less pheromone signals to send to other cats.

If you cat is in good health, not looking for mates and not getting into fights, he will be a happier cat. He will spend more time at home, being friendly and safe enjoying his time with his owner.

The cat not getting injured or into fights will reduce the stress for both the cat and owner. A physically and mentally well cat, is a happy cat.

The Cost of Cat Castration

The cost varies at each vets but generally starts about £50 upwards. Cost also depends on other health issues, length of operation, size of the cat and the amount of any medication it needs. The long term health benefits are well worth paying for this veterinary procedure.

Some charities and rescues are able to help with the costs if you are on a low income. 'Snip and chip' packages are sometimes available. The vets we used offer castration at a subsidised cost. This was stated as being in line with their values of responsible pet ownership and promoting preventative healthcare. 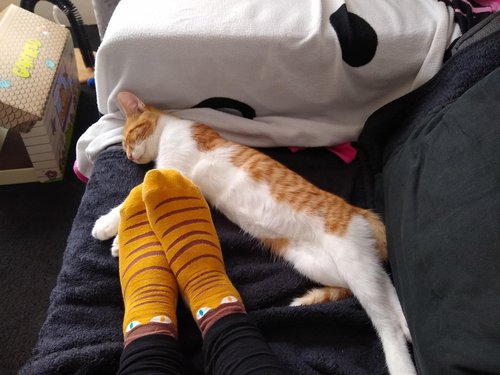 When we were adopting Bean, from Cyprus Pride House, I knew he would need castrating as he was too young to have it done. I didn't think anything of it. Neutering is a routine operation, doesn't take very long and I've seen cats bounce back quickly. When I worked at a vets years ago, I saw that the cats recovered quickly and the anaesthetic seemed to be more of a concern rather than the operation itself.

As Bean was nearing 6 months old, I rang the vets to ask what age they recommend neutering male cats. They do it from 4 months old so I thought now was a good time as any. I'd rung up on the Monday, and he got booked in for his operation on the Friday. We'd had Bean about a month so I felt he had settled in with us and able cope.

I wasn't worried at all, until the night before the operation. He wasn't allowed to eat after 12pm so we gave him a late night snack to keep him going. The operation wasn't a concern so much. With him being an ill street cat before going to the rescue, I was unsure if he had any underlying medical conditions.

The fact that I couldn't tell him that he would be coming back was horrible. Last time he went in a carry case, he got on a 4 hour aeroplane flight, a couple of hours at the animal reception centre, a drive to the outskirts of London, then a 5 hour car journey to my house. I told him we loved him very much and he would be coming back to live with us.

I dropped Bean off at Vets for Pets Prenton in the morning. Due to social distancing, the vet took him away to check him over. The vet came back to say yes, everything was ok to proceed and I signed a consent form. I was told to ring back about 2pm.

When I rang back after lunch to check on Bean's progress, the receptionist/nurse laughed when I said his name. Apparently, he was playing with, and pouncing on his blanket in his pen. I had to laugh as that sounded like him as he is so playful.

As my husband was out with the car, I rang him and he picked Bean up at 3pm. When Bean was collected, his medicine, medicine data sheet and after care instruction sheet were in a bag ready for us. This was amazing as it was easy to read for my husband and children who hadn't had any experience of this before. The instructions were clear and to the point including what to expect, how recovery should go, possible problems, medicine instructions and further guidance.

When they arrived home, I phoned to see how he was. Bean apparently was a bit wobbly and wanted cuddles when they first got back. When I got home, Bean was running around at top speed with the occasional wobble and stopping to wash his back end. We had to shut him in the bathroom as he was keen to climb furniture etc. As I was house sitting, I left instructions to stay with him, give him company and keep him calm and distracted.

When I popped back the next morning, he seemed like he was more or less back to normal but I gave him his pain medication which he kept down. He did wash his bits a lot so I left instructions with the kids to entertain him. The wound looked in good condition - clean, good colour and not too swollen.

On Sunday, when I gave him the medicine he was sick more or less straight away. The vet had warned that this may happen and we should just stop giving it to him unless we were worried he was in pain. He seemed ok, his wound looked like it was healing, he was eating well and acting like normal so I wasn't worried at all. From the photo above, you can see he is a happy chap and he didn't experience any ill effects.

The castration was a great learning experience for my children. However, my son is squeamish at the best of times so didn't appreciate hearing all the details. I think he takes after me as we both get a bit wobbly at the thought of operations. 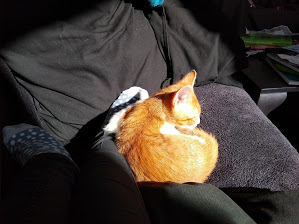 Bean dealt with the whole situation well. No offence to the vets, but I hope he doesn't have to see them again in the near future. :) They did a marvellous job and have helped him have a the best chance at a normal, happy kitten/childhood.

Any questions or if you have got further thoughts, please get in touch.