Over the festive period, I was lucky to have a few extra house guests for small animal boarding.

Christmas is usually an exciting time for us but this year, it was particularly special as we had a giant continental rabbit and two guinea pigs for small animal boarding. 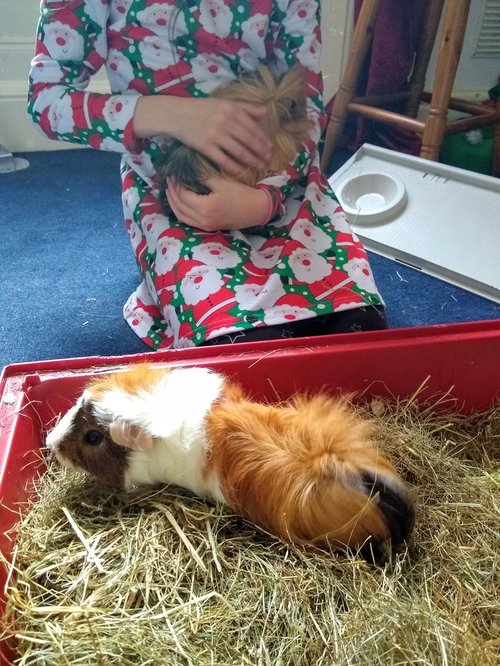 Both families of animals were indoor pets. I set up habitats in our back living room which was a quieter room for them. The owners had chosen me to look after their pets as they would get a home from home environment. I treated them as though they were my own pets so they had lots of fresh food, cuddles and I had a good chatter with them. We had lots of family time in their room as both children were interested. (The pets were only allowed out if I was there to supervise the children.)

I set up their homes to be as similar to what they had at home. Both had brought along soft bedding so they had their home smell to make them feel more comfortable.

The two guinea pigs were adorable. They were a lovely bonded pair but were a bit timid to start off with. They soon overcame their shyness and at feeding time they came out of their shells. They had lots of chirps, chuckles and excited jumps.

My daughter found a guinea pig book on the bookshelf and then followed me around telling me how to look after them. She took great interest in what to feed them and made sure I fed them fresh food as well as their kibble. To be honest, they got excited when they got new hay twice a day. 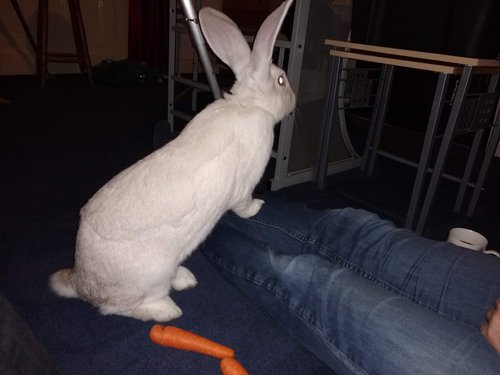 It was a real treat for us to have Snowball, the giant continental rabbit stay for three weeks! I had quite a chat with the owner first to make sure that I could meet her needs. Previously I had only seen these types of rabbits in pet shops when there was a giant rabbit craze. The owner said she was just like a rabbit, but bigger - Snowball was 6.5kg!

I went to the owners house to collect her. This gave me the chance to see how she behaved, her own set up and how to pick her up. This reassured me that I could look after her in the way she was used to.

Snowball had lots of hay, fresh food and even opened her own Christmas present. 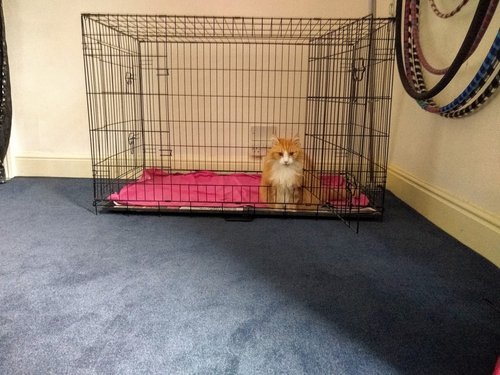 Ginger, our cat was interested but wasn't allowed in the room while the visitors were here. She spent a lot of time lying by their door sniffing. Snowball sniffed at the bottom of the door back at Ginger but wasn't alarmed by her.

Both pet owners were pleased with how their pets were looked after. Snowball's owners asked if I would have her again for small animal boarding if they went away again. It was a great privilege to have these animals so yes please, I'd welcome them all back.