The way that I cut a cats nails depends on the cat. This article explains the three methods that I am comfortable using.

Nails need to be kept relatively short so that they don't get caught on things, pulled out or at worse, grow into the skin and cause an infection. I consider it to be like humans nails and I don't like it when mine are too long so I prevented from doing things or if one gets caught it feels horrible.

*Be careful when you cut animal nails, as there is a vein inside and you don't want to cut it. Hold the paw up to the light and you can see when the line of blood is. (This is easier with light coloured nails.) A great photo guide is on the Washington State University website.

Even if you have an outdoor cat, their claws may need to be trimmed at times. Ginger is an indoor cat so I have a couple of 'cat trees' in the house. These are basically large scratching posts with different level platforms. As she is a large cat, she likes the taller posts so that she can stretch at the same time as scratching. However, she will use the sofa and carpet as well... A cat I looked after enjoyed scratching the wallpaper and the stairs carpet. 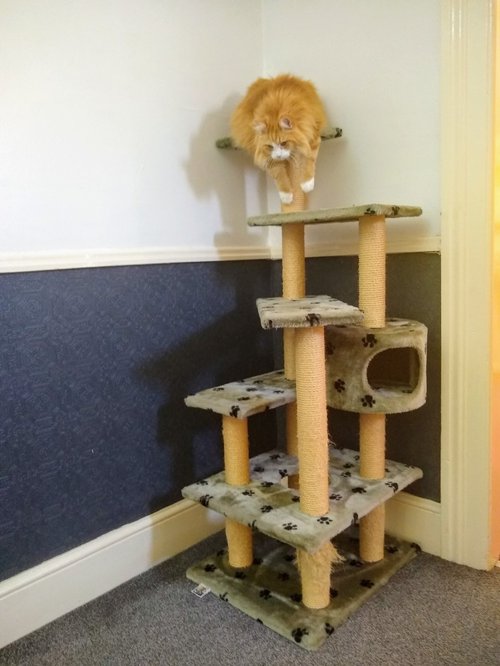 It is best to have nail cutters suitable for the animal you are cutting. There are a range on the market, some of which have nail guards so you can't cut too much off. Personally, I find it easier to move the guard out of the way so I can see properly but I have had many years of practice on many animals.

Which ever method you use, it is best to hold the paw with one had so you can separate the toes, make sure the nail is out and keep it still. There is a balance between holding the paw still and so the cat can't pull it away.

Ginger is such a softy and it is relatively easy to cut her nails. I get my husband to hold her 'like a baby' so I can get to her nails. She demonstrates she isn't happy by purring aggressively and retracting her claws as far as she can. This is my favourite method as both us and the cat are used to it and it doesn't take too long. 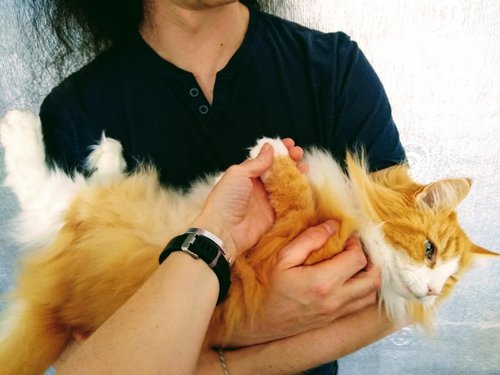 Method 2 - While the Cat is Relaxed

Recently I was cat sitting and the cat had a few long back claws. I wanted to ensure she didn't get caught. As I was on my own, I tried a different way. She was sat on the sofa arm, and I was able to just snip them. She was a very docile cat and showed her displeasure by sitting on her paw so I couldn't get to it. I was patient, gave her more cuddles and she forgot so I got the next one. We only had to do this a few times as not many claws needed cutting.

When I worked at a vets, one person held the cat on the table enabling another person to cut the claws with two hands. The cat had to be held so that it couldn't swipe with the front paws. Also, some cats had a tendency to bite.

For me, this is the last method I try as it isn't usually enjoyable for the cat.

How Best to Trim the Claws?

The best way to do it is the way that the cat minds the least! Failing that, the way that it is easiest and quicker for the owner to do which means the cats experience isn't prolonged.

If you don't feel confident doing the claws then don't. It's best not to cause damage or stress to either of you. Many vets have nurse surgeries where you can get an appointment and they will do it for a charge. Alternatively cat and dog groomers provide this service too.

It's best to cut them before there is a problem and if you do it little and often, the animal gets used to it. When I had ferrets, if one needed doing, they all needed doing so I did 100 animal nails and then 40 children's nails. This meant is was a busy day but I felt happier knowing the pets were looked after.