This month I provided my first house sitting service for a pet lover with lots of animals. Not only did I look after her dogs, but lots of reptiles too.

I had the pleasure of staying in Liverpool for 8 nights to look after a house full of animals. I'd previously met the owner at an event and she contacted me as I had experience with exotic pets. She'd said she liked me as she could tell I cared about the animals. We'd had quite a long chat and I explained I only use reward and positive training methods. Before this, I hadn't thought of providing a house sitting service.

Before I look after any animal, I always offer a free meeting so I can learn about the pets. This was very vital in this case as the animals all had specific needs. The owner also wrote down some clear instructions of the pets' requirements. I appreciated this as I didn't want to get anything wrong. Also, the owner had peace of mind knowing that I could always refer to it.

When I house sit, I guarantee I will be in the house/with the animals at least 20 hours in each day. This means I can pop out to my normal visits, get food or see my family. With the wonders of technology, my daughter video called me and then took me on a tour to see my son, the cat and the mice.

Each evening I sent photos and updates to the owners. If I had any questions I was able to contact them which I did when the exotic pets lights timer didn't work. They were then able to reset the timer using their app. I kept my usual pet sitting log to make sure I knew what they had eaten, what had come out the other end, plus their activity. 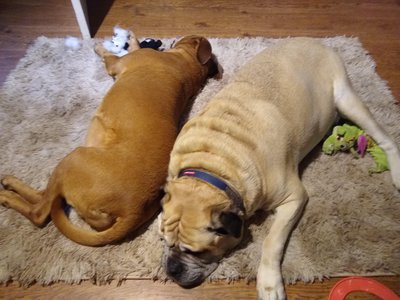 The two dogs were the main priority as they like company and weren't used to being left for long periods of time. Riley had some health issues which meant he slept a long time and had separation anxiety. He didn't walk very far due to hip problems but he did enjoy playing, cuddles and interaction. At one point he threw his soft toy and it hit my head. I did laugh!

Both dogs liked company but Mitzi especially. She would stay with me most of the time including going upstairs when I did. She even went to my bed when I was cleaning my teeth. Mitzi snored and fidgeted more than I expected but I didn't mind.

I loved taking Mitzi for walks and exploring the local area. Some of the views were beautiful. Mitzi had three walks a day; two half hour walks and in the evening, an hours walk. She did like to eat food so I had to keep an eye out for discarded food and move her away before she got it. Unfortunately sometimes she was quicker than me. 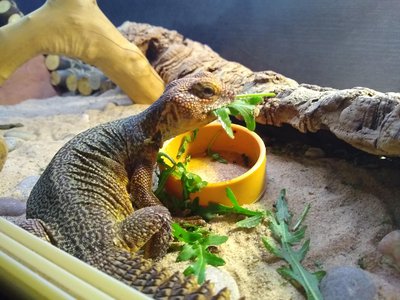 Eric was so cute. Yep, he was a spiny tailed reptile but he really was a lovely character. He was quite active and liked being handled. I was lucky that the owners had fed the 'insects' before I went so I only had to feed him his daily plants and seeds.

He changed colour depending on how warm he was. He was a green/brown normally but went orange/red when warm. Sometimes he chose to be right under his heat lamp but not always. It was strange making sure Eric's vivarium was warm but dry and not humid.

I seriously fell in love with him. If they were always vegan I would get one. (I'm personally not fond of insects but wouldn't want to deprive my pet of its normal diet.) 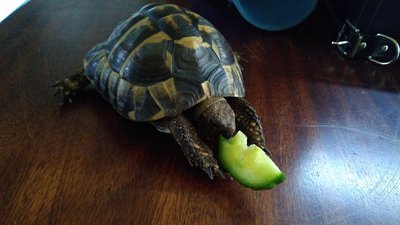 Jeff was a gorgeous Hermann's tortoise. Jeff was more active than I was expecting. He was fond of food! He liked being hand fed. Cucumber and strawberries were his favourite treat. He only ate plants and seeds with supplements. In fact, if they could eat spinach I would've shared my food with him.

Every three days he had a long bath and I gently brushed him. He did have water in his habitat but it didn't compare to having a good splash around.

Jeff liked being handled and he came out daily for a run around (when the dogs were asleep/out of the way). 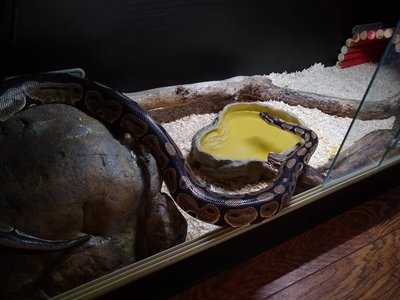 Introducing Freddie, the royal python. Freddie was lovely but I'm afraid I still have an irrational unease as he was really long. I can't explain why I felt that way. On the bright side, I handled him every day except for the last day as he would have been a bit peckish. I also changed his water every day and sat next to his vivarium chatting to him.

The owners fed him before they went away. This reassured me that he was happy and well as he could be. Also, it has been a few years since I have defrosted a pinkie for snake food.

They also had a gecko called Pepper but I didn't see him. I put fresh food in daily and misted his viv twice a day. The only evidence that there was a gecko was that the food had gone. I tried staying up late, getting up early but nope, he did not appear.

The responsibility of looking after someone else's loved pets is immense. I loved pet sitting and really cared about the pets as if they were my own. I did everything I could to make sure they had their normal routine and did the things that made them happy. Half way through the holiday I even went and bought another soft dog toy for them as I thought they needed it. (They had enough but I wanted to give them a treat.)